skip to main | skip to sidebar


On January 10th 2011 a trial against Luis Posada Carriles, one of the most infamous terrorists in Cuba and in all of Latin America, began in El Paso Texas. However, Posada was not being tried for terrorism, but rather for the minor charges of perjury and immigration fraud. On Friday April 8th 2011, after 13 weeks of testimony and only 3 hours of jury deliberation, Luis Posada Carriles, was acquitted of all 11 counts of perjury, obstruction and immigration fraud.

From its very beginning, this farcical trial of Posada has been an insult to the Cuban people and to all those who seek peace and justice around the world. In a travesty of justice and emblazoned hypocrisy of the US Government, Posada walks freely in the streets of the United States while 5 Cuban men, Gerardo Hernández, Antonio Guerrero, Ramon Labañino, Fernando González & René González remain unjustly held in US Jails for over 12 years. Their “crime”? Investigating Miami-based terrorist organizations, led by such people like Posada, which since 1959 have been responsible for the deaths of over 3,400 people in Cuba. While Posada is allowed to live out his the rest of his life in peace, as a protected agent of the United States government, the Cuban 5 are serving inhumane sentences of one life term plus sixty-nine years collectively.

The Free the Cuban 5 Committee – Victoria is calling on all peace loving people in Victoria and around the world, to condemn the US governments April 8th decision in acquitting Posada of all charges and to demand that Posada be extradited immediately to Venezuela to face justice for the bombing of a Cuban civilian airliner in 1976, that killed all 73 people on board, one of his many terrorist crimes. We also call on all those who seek peace and justice to join the millions of people around the world who continue to struggle for the freedom of the 5 Cuban heroes held in US jails.

Now is the time to redouble our efforts to build a strong and effective campaign for justice and human rights that demands:

The Cuban 5 Vs. Terrorist Posada Carriles 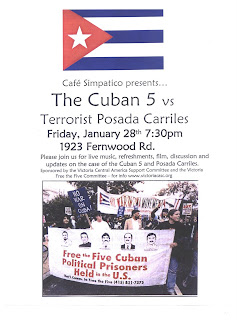 Luis Posada Carriles is a man who is responsible for leading torture and death squads across Latin America, who orchestrated the 1976 bombing of a civilian Cuban airliner killing all 73 people on board, and who organized a series of hotel bombings in Havana resulting in the death of an Italian Tourist. Luis Posada Carriles is the most famous terrorist in Latin America, paid and supported by the US Government.

On January 10th, a trial against Posada began in El Paso Texas. What are his charges? Not the murder of innocent people across Latin America, or terrorism against the people of Cuba. Posada is facing minor charges of perjury and immigration fraud.

Meanwhile 5 Cuban men, Gerardo Hernández, Antonio Guerrero, Ramon Labañino, Fernando González & René González remain held in US Jails for over 12 years now. Their crime? Investigating and providing evidence to the US Government about terrorist activities directed against the Cuban people, organized by groups led by such people as Posada.

If convicted in El Paso, Posada will face a maximum sentence of 5 to 8 years in prison, meanwhile the Cuban 5 are facing sentences of 4 Life Sentences plus 77 years combined.

Millions of people around the world are organizing and fighting for the Freedom of the Cuban 5 heroes and for the extradition of Luis Posada Carriles to Venezuela where he will face justice for his crimes against humanity.

On January 28th, please join us for live music, film, discussion and updates in the case of the Cuban 5 & Posada Carriles.

Indorsed by the Free the Cuban 5 Committee - Victoria 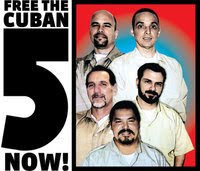 This Sunday, September 12th 2010, was different than any other. This Sunday marked the 12th anniversary of the unjust imprisonment of the Cuban 5 heroes unjustly held in US jails. And on this Sunday millions of peace loving people around the world from Victoria Canada to Windhoek Namibia, organized special actions for the freedom of our 5 Cuban heroes.

In Victoria, the Free the Cuban 5 Committee – Victoria headed out to the rainy streets of Downtown to raise awareness about the case of our 5 heroes. With a small card table full of information we handed out dozens of brochures and collected 100 signed postcards demanding US President Barak Obama free the Cuban 5 now! People of all ages and backgrounds stopped to find out more about the
case and show their support, which is needed more than ever in this crucial time in their case.
On September 19th the Free the Cuban 5 Committee – Victoria will be setting up a
table again in Downtown Victoria as part of the International Period of Action
to free the Cuban 5. We encourage all peace loving people to join us in this
ongoing urgent campaign.

After 12 years of injustice the Cuban 5 have not given up hope, love or dignity
and continue as strong as ever in the struggle for their freedom, especially in
a time when almost all legal actions are coming to an end and political pressure
is the most important avenue for liberating the 5 Cuban heroes from US jails. As
peace loving people it is our duty to stand beside them and continue to demand:
FREE THE CUBAN 5 NOW!

Forum&Discussion: The Case of the Cuban 5 Heroes Held in Us Jails and the Ongoing Struggle for Their Freedom

MANUEL YEPE- journalist and professor at the Superior Institute
of International Relations of Havana. Manuel was a leader of the
underground July 26 Movement in Matanzas leading up to the
triumph of the Cuban revolution, and worked directly with
Ernesto Che Guevara.

ISAAC SANEY- highly acclaimed author, professor at Dalhousie
University in Halifax and co-chair and spokesperson for the
Canadian Network on Cuba.


Now is more important than ever for peace loving people in
Victoria and around the world to know more about the case of the
Cuban 5 and its importance in the struggle for human rights and
justice.The newly formed Free the Cuban 5 Committee - Victoria
and the Victoria Central American Support Committee is inviting
you to an evening with internationally acclaimed speakers where
we will be discussing more about the life and struggle of these
5 heroes, new important developments in their case and what we
can do to help in the worldwide campaign for their freedom.

Gerardo Hernández, Antonio Guerrero, Ramón Labañino, Fernando
González and René González, known internationally as the Cuban 5
heroes, have been unjustly imprisoned in U.S. Jails for over 11
years. Their so-called crime was investigating U.S. sponsored
right wing, anti-Cuban terrorist organizations in Miami that are
responsible for the deaths of over 3,400 innocent Cuban people.

This Mothers Day, May 9th 2010, the Free the Cuban 5 Committee - Victoria set up an information table on the corner of Government and Pandora in downtown Victoria to raise awareness about the case of the Cuban 5 political prisoners held in US jails. We were also asking those passing by on the street to sign the postcard demanding Barack Obama Free the Cuban 5 Now!

3 people participated and we got 45 postcards signed for the Cuban 5 in just under 3 hours. We also handed out dozens of flyers and factsheets about the case of the Cuban 5 for those who wanted to know more. Sunday's tabling was a second good start in downtown Victoria and indeed a good success in raising awareness among the public, both young and old, about the case of our 5 Cuban heroes and generating the much needed support for their freedom among our communities, which is needed very urgently right now.

Forbidden Heroes: The Untold Story of the Cuban Five

A series of articles on the history of the case of the Cuban 5 by Ricardo Alercon, President of the Cuban National Assembly of Peoples Power:

* The Face of Impunity

* Incapacitating the Cuban 5: In Their Own Words

* It Happened in Miami

* An Insult to Humanity

* Which Side Are You On?

* Without Any Exception Whatsoever?